A staple of the community and an anchor to downtown Richmond small businesses, the Tin Lizzie under the ownership of Ron Hughes will be closing its doors today after a successful 11-year run.  Many have gathered today to wish Ron Hughes and Rachel Hughes a fond farewell.

Ron Hughes opened the doors to the Cafe, after coming from a long background in restaurant management and serving the public.  He and Rachel had the vision to serve the community by offering a welcoming place to eat in a friendly family-run space.   Over the years they have touched the lives of many who gather for a cup of morning coffee and a chat with Ron and Marlene- their beloved cook.

Many groups have used their welcoming space for birthday celebrations, anniversaries, tea parties, and many other causes for marking special moments in the lives of families and friends.  Their impact goes beyond the individual to the many non-profits they have supported over the years, little league baseball teams and so many other local fundraisers.

Over the years Ron has managed to overcome challenges to the downtown area including closed roads and downturns in the economy.  His expertise in running businesses prior to the Tin Lizzie and later the addition of the Tin Cup: Tea and Gift Shop, helped him to weather the many storms.   And through all of the struggles that are continuous with running a small business, Ron has always greeted his customers with a smile and welcomed them into their family restaurant for a home-cooked meal and a unique experience.

When asked what their next steps are Ron interjected jokingly “Well Rachel will keep working- she has to support me.”  And he added that he will be “doing all the things I’ve been wanting to do for years.”  Those things include working on his Model T and other projects that Rachel is adding to her list.  Rachel added in her tongue in cheek way, “well you know he will be home alone a lot since I will be working, so I’m a little worried about that.” But she added he should be kept busy with their new home on three acres of land in the country.

Marlene will also be tending to some much needed nap time as well as several projects around her home and is looking forward to some very earned down time.

The name of their Cafe and its origin says a lot about their own success over the years.  Avid Model T fans and owners of their own Model T, Ron and Rachel named their Cafe after the Tin Lizzie Model T style that was the most influential car of the 20th century, from 1908 -1927,  and was priced so that the average American could afford it.  Tin Lizzie (the car) had the earlier nickname of Old Liz because it looked “worse for wear” and was compared by some to a tin can, but later it went on to win its first race in 1922.  It was proven to be durable and speedy like the Model T.  And like Ron and Rachel, it beat the odds to go on to be a very successful and unique automobile. 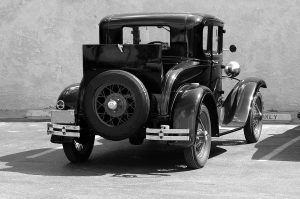 Ron and Rachel also beat the odds in the small business world and gave so much to the community in the process.  We at Go Wayne County wish them well in their future endeavors and wish Ron the best as he begins to enjoy a much-deserved retirement.  (Note:  if you miss seeing Rachel’s smiling face, she is the newer director for the Model T Museum in the Depot District).